Please be aware actual product may vary. All discs are PDGA approved.

Kastaplast Falk
Speed: 9 Glide: 6 Turn: -1 Fade: 2
THIS BIRD LOVES TO FLY! THE FALK CONTROLS THE FAIRWAYS AND REACHES ITS TARGET EFFICIENTLY BY USING THE RIGHT COMBINATION OF SPEED, GLIDE AND ACCURACY. JUST LIKE THE BIRD IT WAS NAMED AFTER.
This versatile fairway driver fits the skills and power of a wide range of players. With a comfortable grip and a rim width at 19 mm the Falk suits most hands and styles. Falk is Swedish for falcon.

Suitable for: Glidey tailwind shots, long anhyzer lines and hyzer-flip drives.
Kastaplast Reko – K3
Speed: 3 Glide: 3 Turn: 0 Fade: 1
The Reko is a nice putter with a round lip and small bead. The disc feels very comfortable in the hand for both power grips and fan grips. The Reko has very little low speed stability, which means it stays on its line with a predictable flat drop that sticks the landing and reduces rollaways.

Kastaplast Kaxe – K3
Speed: 6 Glide: 5 Turn: 0 Fade: 2
“THE Z” IS THE BEADLESS VERSION OF KAXE AND IS OFTEN REFERRED TO AS A SLIGHTLY SEASONED KAXE, FLIGHT-WISE. STRAIGHTER AND GLIDIER, BUT STILL DEPENDABLE AND KAXEY!
Just as with the original Kaxe we have called it a midrange driver, but it’s just as much a fairway driver. A multi-purpose disc. The Kaxe Z can handle a decent amount of speed and wind, but will also perform better than the typical driver when powered-down. With this disc we’re introducing the Z as in Zero, symbolizing less stability than the original mold. 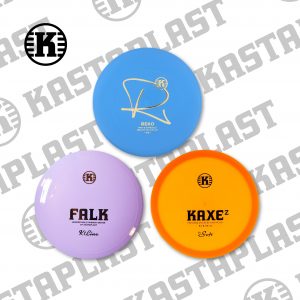